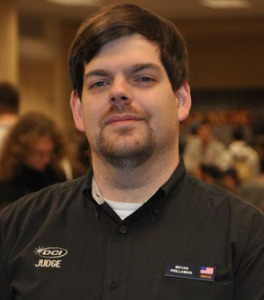 Bryan Prillaman has been playing Magic since Antiquities, and a has been a Judge since Worldwake.  In real life he is single father of a beautiful little girl and a Systems Engineer by trade.  In Podcast Land, Bryan was a host of the now defunct Avant-Card Show, and occasional guest host on other podcasts on the Mtgcast.com network.  Bryan is older than the stereotypical judge and tends to drone on about tangents pertaining to 80s cartoons and the Iran-Contra scandal, and has earned the nickname “Mossy.”  He is personally responsible for every JudgeCast episode being longer than an hour.  But deep down, in places you don’t talk about at parties, you want him on that podcast; you need him on that podcast.
Bryan can be contacted via email at bprill.mtg@gmail.com or via discord as bprill.  He also lurks on JudgeCast’s Facebook and Twitter accounts, so just throw up the bro-signal, and he will come running.

Samma started playing Magic sometime around the Khans block, so despite being a mostly red player there will always be a special place for Ugin in her heart. Her favorite formats are Modern and Sealed. Every time she tries to build a Standard deck the key pieces get banned and really that’s probably what she deserves for being such a relentless netdecker. Samma decided to become a judge in 2015 while managing a LGS in Washington, DC because the local judges were the coolest and most hard-working people she had ever met and she wanted to get in on whatever was making them so great. Community building in the judge community has been her passion ever since. Outside of Magic, Samma is currently working on earning her master’s degree from the University of Florida and has kept her 4.0 GPA alive so far, so please clap for her next time it comes up in conversation. Her hobbies include watching retro anime and making questionably unattractive arts and crafts projects.

Charles was introduced to Magic by a friend and LGS owner that wanted to make sure he could keep up with his kids. Eleven years later, he’s now a judge and argues with his younger son at the dinner table about AP/NAP. Married with two adult children, Charles has worked for libraries for decades and has recently earned a graduate degree that declares he is a Master of Information. One of his proudest achievements as a judge was serving as Area Captain for New Jersey. His #1 qualification to join the JudgeCast team is he knows – or pretends to know – most of the pop culture references made by his co-hosts. Charles lives for working side events, building community, and spreading hope (he wears the blue ring).

Charles can be found on the Judge Academy USA-East Facebook group or on Twitter under the handle @mtgdad. Legend has it he can be summoned by waving some goblin tokens in the air. He may or may not have an alter ego, Dr. Judge, who is still mad at Dr. Julius Jumblemorph, that pretentious hack of a shapeshifting scientist.